Hidden champions form an elite among companies. In particular, small and medium-sized enterprises (SMEs) can learn from Hidden Champions, since many markets are local or regional, in which one can strive to become number one. Large companies can also learn a lot from Hidden Champions to manage their business units. Hermann Simon vehemently contradicts the thesis that good corporate governance can only be learned from large companies. It applies to investors that such companies are determined, clearly focused and that continuity is maintained.

Only focus leads to world class. Hidden Champions are focused on their technologies and markets. They create unique products that make them better than everyone else. And that’s what they focus on.

Undeterred by the changing management fashions, Hidden Champions in their ambitious pursuit of market leadership are characterized by a strategy of focus and depth as well as continuous internationalization and consistent innovation orientation. 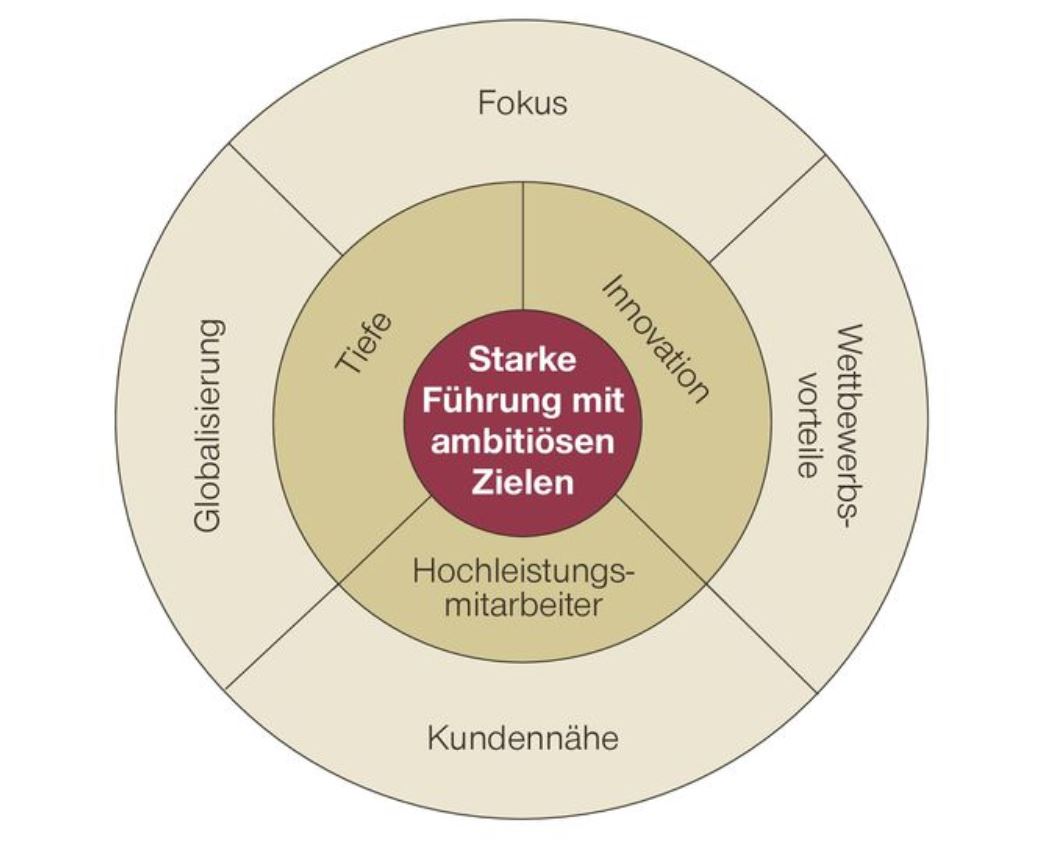 Hermann Simon: „The strategy of the hidden champions in three circles“

Hermann Simon (website) is the founder of the Hidden Champions Theory and an expert in strategy, marketing and pricing.

Before devoting himself entirely to management consulting, Simon was a professor of business administration and marketing at the universities of Mainz (1989-1995) and Bielefeld (1979-1989). He has also been a visiting professor at Harvard Business School, Stanford, London Business School, INSEAD, Keio University in Tokyo and the Massachusetts Institute of Technology. From 1995 to 2009, he was CEO of Simon-Kucher & Partners. 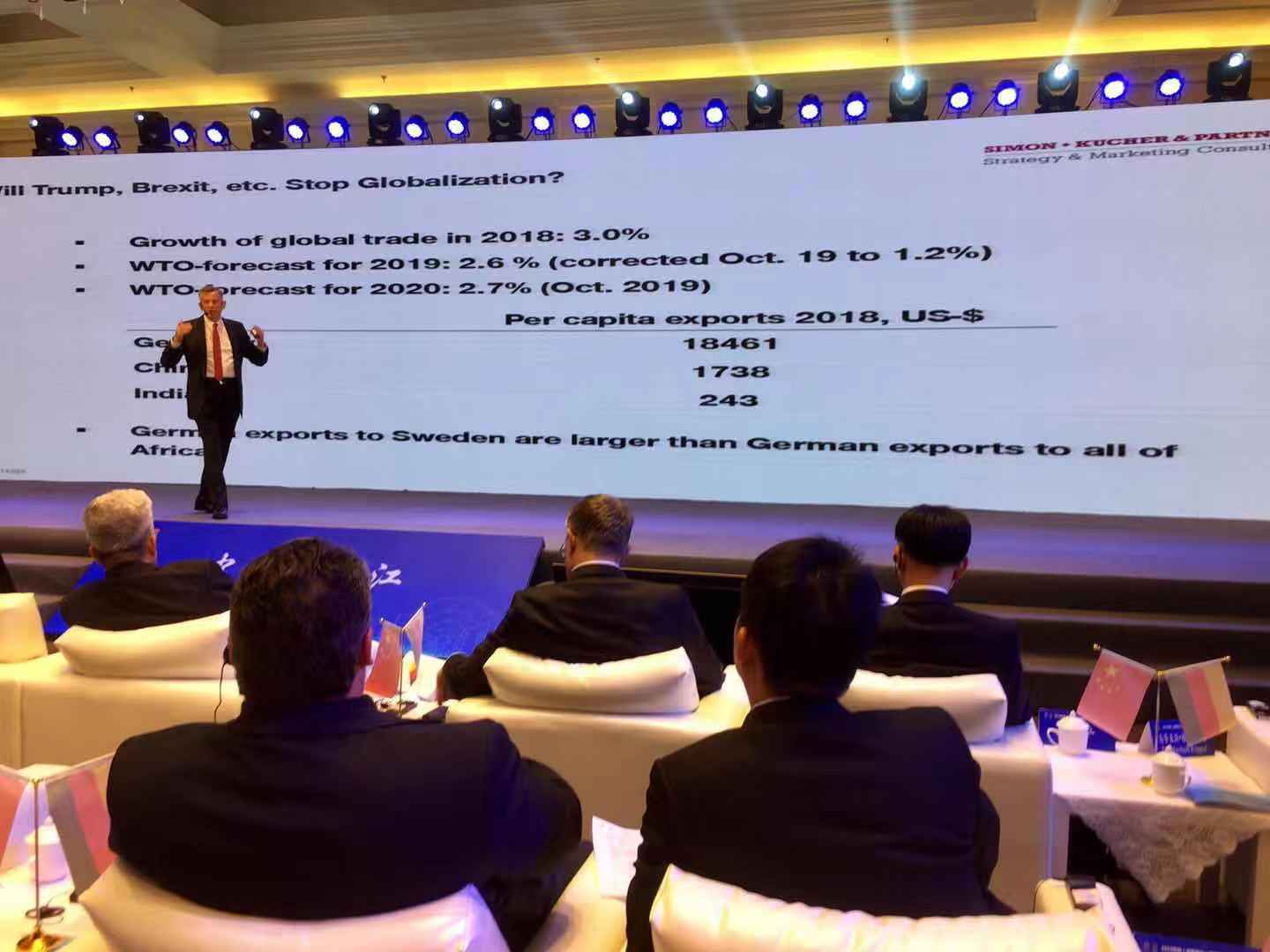 Prof. Hermann Simon during a speech in Chengdu, China 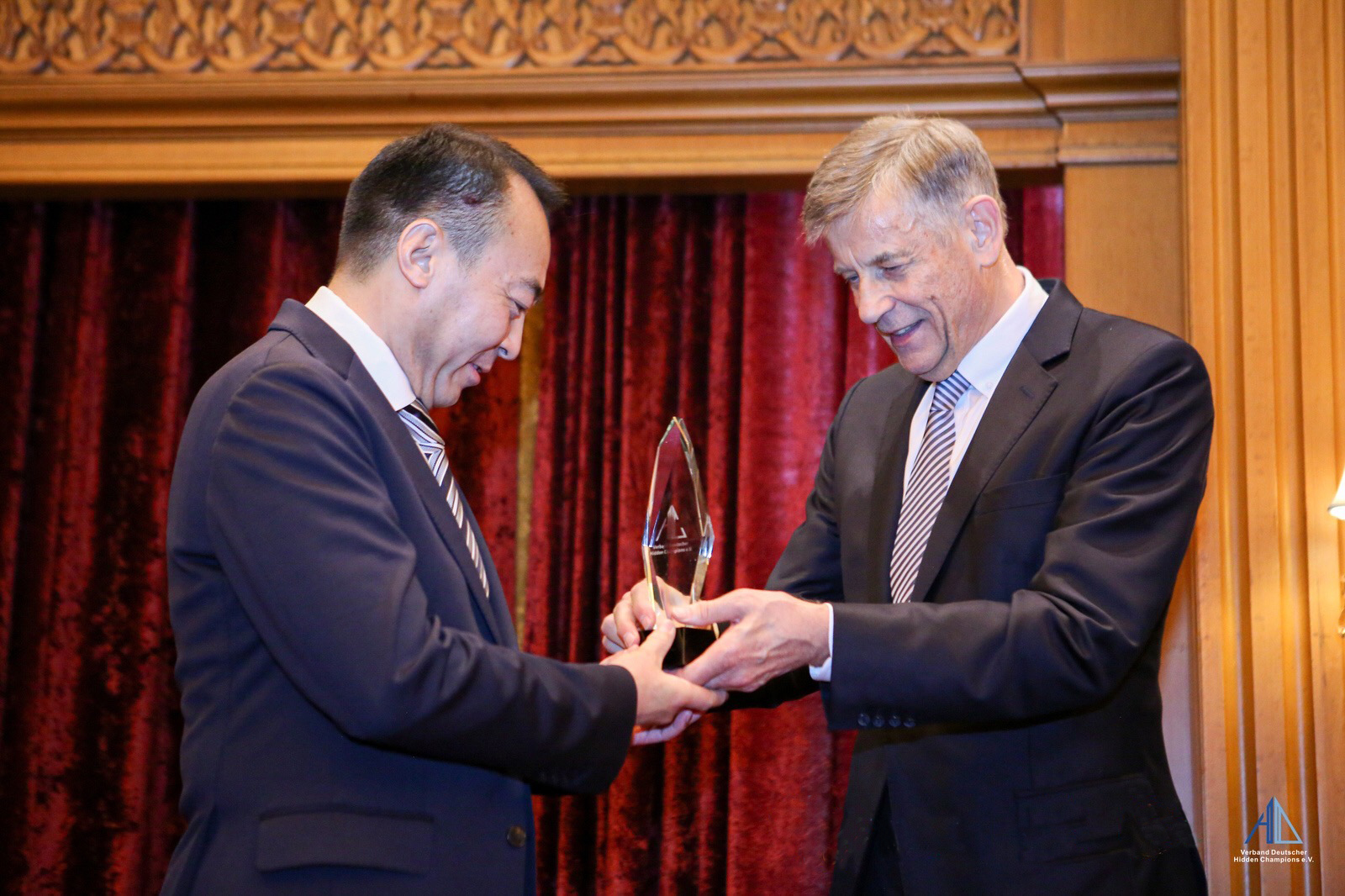 Professor Simon has published over 35 books in 26 languages, including the global bestsellers Hidden Champions (Boston 1996, cover story of BusinessWeek 2004) and Power Pricing (New York 1997) and Manage for Profit, Not for Market Share (Boston 2006).

His book Hidden Champions of the 21st Century, Success Strategies of Unknown World Market Leaders (New York 2009) examines the strategies of little-known market leaders. His book Confessions of the Pricing Man was published by Springer, New York, in 2015. The standard textbook Price Management was published in 2018.

Simon has served and continues to serve on the editorial boards of numerous business journals, including the International Journal of Research in Marketing, Management Science, Recherche et Applications en Marketing, Décisions Marketing, European Management Journal, and several German journals. For several decades, he wrote regular columns for the German business journal Manager Magazin. As a board member of numerous foundations and companies, Professor Simon has gained extensive experience in corporate governance. From 1984 to 1986, he was president of the European Marketing Academy (EMAC). Simon is co-founder of the first Special Purpose Acquisition Company (SPAC) listed on the German Stock Exchange in Frankfurt and of the first search fund in Germany.

In November 2019, Hermann Simon Business School was opened in Weifang, Shandong Province. The new business school will take the idea system of hidden champions as its core, with the aim of solving the problems in the process of globalization of Chinese SMEs. To do so, it will draw on the advanced experience of Germany and global hidden champions in the field of internationalization and innovation. A world-class business talent team with international vision and leadership will build the business school into a first-class incubator for SMEs as hidden champions.

Branches will be established in six other cities in China, including Zhuhai, Wenzhou and Taicang. The Business School will push management education and related activities in China, especially through seminars, courses, workshops and coaching, development of case studies on hidden champion companies, teaching the hidden champion concept, continuing education for SME executives. 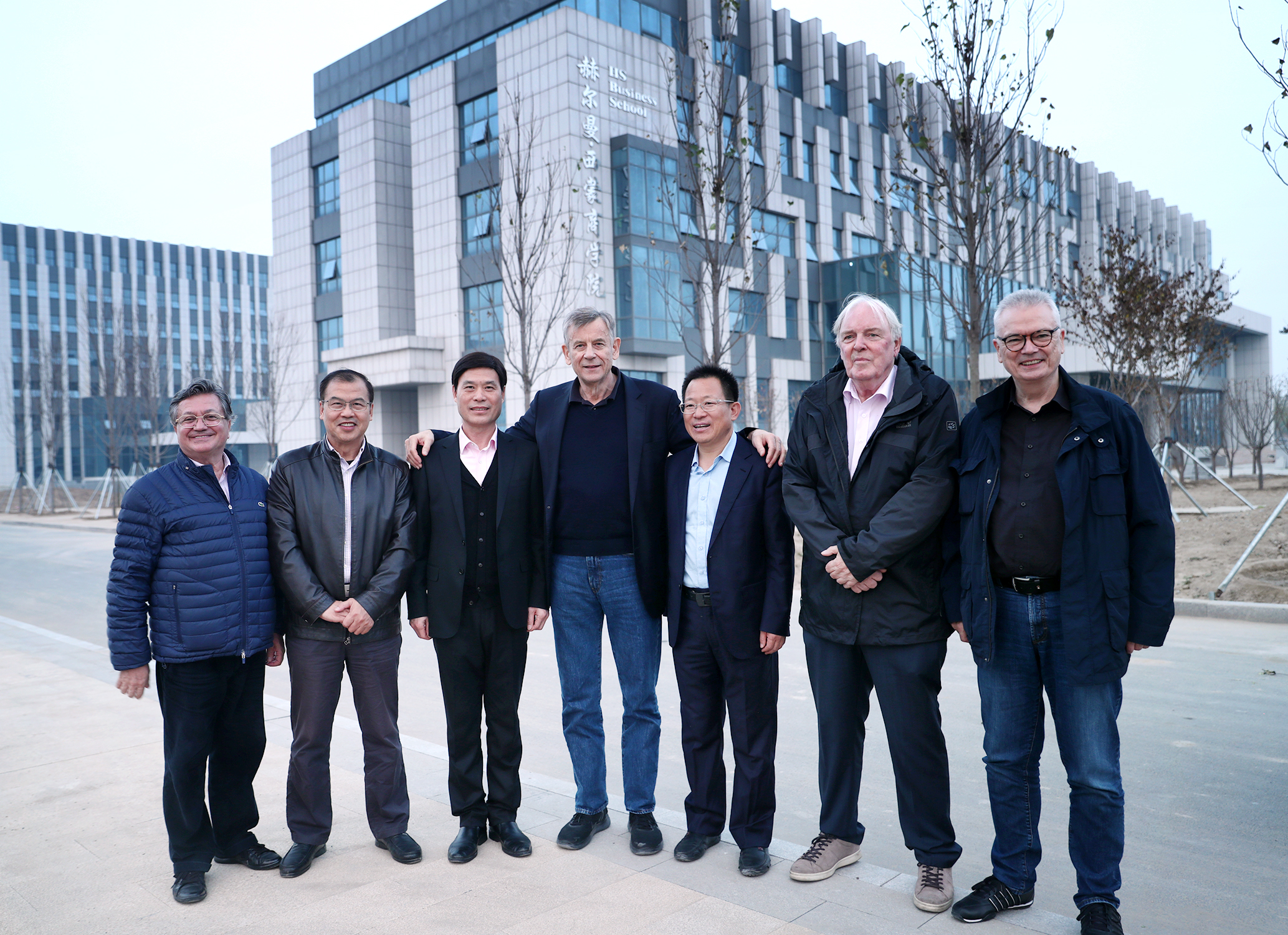 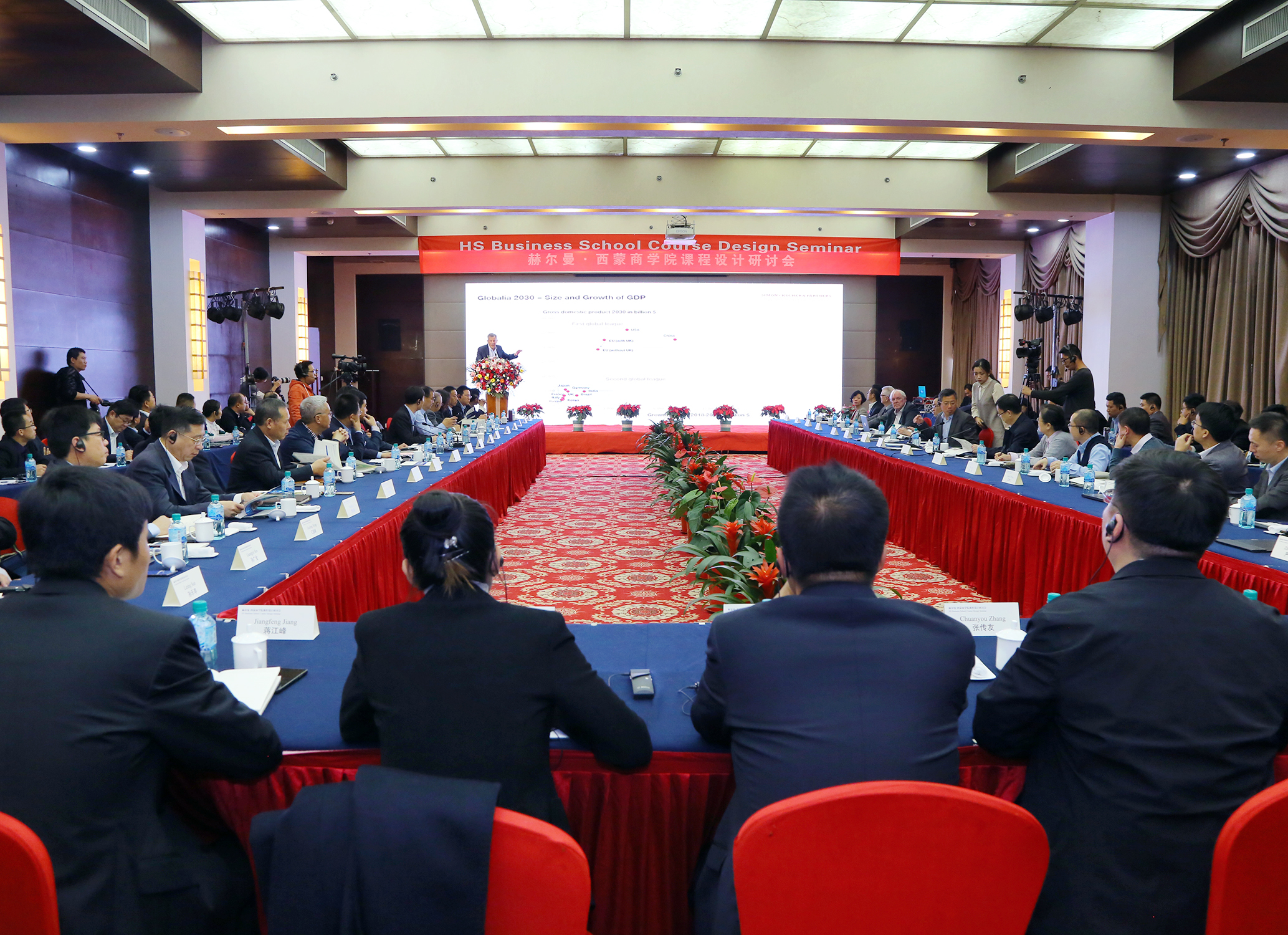 On May 11, 2021, the Hermann Simon Business School in Shouguang, China was inaugurated. The new university focuses on the Hidden Champions concept. It sees its mission in the education of medium-sized entrepreneurs and managers, combined with a consistent international orientation. The renowned Beijing strategy expert Professor Liu Hongsong has been recruited as president. The university is also supported by an international advisory board of leading experts and has already initiated initial collaborations with universities in Japan, Israel and Germany.

In his inaugural lecture, held virtually because of Corona, Professor Simon described China and Germany as “winners of globalization” and addressed new trends in globalization. He emphasized that exports are increasingly being replaced by direct investments. As a result, companies will increasingly invest in each other’s countries. Simon sees the new business school as a bridge builder between China and Germany and emphasizes that the two countries are dependent on prosperous economic cooperation despite political differences. Staying away is not an option, he said, and the new university wants to contribute to international understanding.

Link to the stream of the opening ceremony (English): Link English

Link to the stream of the opening ceremony (Chinese): Link Chinese

On our media page you will find more books and articles, case studies, videos, images and useful links on the topic of hidden champions.